The site of the Kharkiv Human Rights Group published an article about the Chebotar case, using materials from the Legal Monitoring Center “Gіdnіst”.

If the forensic medical expert is right, then the young man on trial for the murder of a child that led to shocking anti-Roma riots in the Odesa oblast could not have committed the crime.  23-year-old Mykola Chebotar has been in custody since shortly after 8-year-old Angelina’s body was found close to her home on 27 August 2016, and the first question should perhaps be why, given the significant clash between the forensic evidence and the prosecution’s indictment.

It was at the defence’s insistence that Oleh Halev, the forensic expert who first examined the little girl’s body was questioned at the latest hearing on 10 December.  He gave a detailed account of the various methods which led him to conclude that Angelina had been killed during the night of 26-27 August between 22.00 and 1.25 a.m.

Since the prosecution claims that Chebotar committed the crime at 3 a.m., and the latter has an alibi until 2.30 a.m. at the very earliest, the time of Angelina’s death is critical.  Tatyana Gerasimova, from the Centre for Legal Monitoring, notes that there were very tense moments in court and gives an almost verbatim account of the questions asked, which were clearly aimed at seeing if the possible time of the crime could be stretched to 2.30 a.m., meaning that the defendant could have committed it.

Halev appeared to waver a lot under questioning, however did state that he believes the latest possible time to have been 2 a.m. It remains to be seen whether he holds to this under further questioning, now due on 20 December.

This is not the first detail about the case which has aroused concern as to whether the right person is on trial.

The then 21-year-old Chebotar was taken into custody almost immediately after the child’s body was found. Gerasimova is blunt in saying that, having grabbed the young man, they beat testimony out of him, and concocted a case around this. She does stress that there is some evidence that appears to be against Chebotar.  His cap was found lying on her bed, the murder weapon was found at his home and there appears to be a trace of his DNA on the little girl’s hand, together with the DNA of a person who has not been identified.  The sheer obviousness of the first two pieces of evidence and the fact that from the first moments of the investigation, no other version but Chebotar’s guilt was ever considered (and no attempt made, despite the obvious need, to get other DNA samples), makes her (and others) wary enough to want to ensure close scrutiny of the trial.

Chebotar had spent most of the evening in question together with Oleksandr Matyash, the step-father of the murdered child and some other people.

Matyash stated in an earlier hearing that the group had had some drinks in a local bar, after which they went to celebrate his brother’s girlfriend’s birthday.  They were there, drinking beer and vodka, until around midnight, and then returned to the bar.

On the way, Matyash dropped in to check what the children were up to.  He says that he saw that Angelina and her younger brother were asleep and left.  Chebotar did not enter the house, but waited on the street.  They were in the bar until three, after which Matyash says he returned home and fell asleep immediately as he was extremely drunk.

The defence have long pointed out that the estimated time of the little girl’s murder coincides with when Chebotar was in the bar, in the company of several witnesses. Andriy Leshchenko, Chebotar’s lawyer, also notes that the forensic examination found DNA on Angelina’s hands that has not been identified. A sample of Matyash’s DNA was never taken.

The events in Loshchynivka following Angelina’s murder aroused enormous concern, and not only in Ukraine.

Chebotar is reportedly only half Roma, and was not particularly a member of the Roma community.  He was born in Loshchynivka and had lived there all his life, which also gives the lie to the claims of those who took part in the violent riots after his arrest that they were only against Roma who had arrived in the last three years.

A crowd of 150-170 locals set fire to one Roma building and devastated several others. The fact that nobody was injured is probably only because the people in the houses fled in time.

While the police were heavily outnumbered, the video footage showed them making no effort at all to intervene, just standing and watching.  There were also no attempts to call in reinforcements from other areas. It was only after the local authorities promised to hold negotiations the following day, that the crowd stopped the destruction.  By that stage, around ten homes had been smashed up.  Three were owned by the people in them, the others were rented.   Dumskaya noted that the three homes of more affluent Roma had not been targeted.

It is unclear what methods were used to persuade the local Roma community to leave Loshchynivka, but the very fact that the local authorities obtained such agreement essentially meant that they were siding with the pogrom participants.

Lawyers are continuing to fight the prosecutor’s unwillingness to carry out a proper investigation into police inaction.  The prosecutor keeps terminating such investigations, with the courts, at the application of human rights lawyers, then ordering it to be reinstated.

Seven former Roma residents of Loshchynivka have also lodged a complaint with the court against the Mayor of the Loshchynivka Village Council Viktor Paskalov and the Odesa Regional Police.

All seven claimants were forced to leave their homes which the rioters destroyed, and are seeking both acknowledgement that the police and Mayor’s actions were unlawful, and compensation (100 thousand UAH each).

On 10 August 2018 the Odesa District Administrative Court agreed that Paskalov’s decision to evict the Roma community had been illegal.  The court, however, refused to find the police inaction unlawful and also rejected the application for compensation.

It is likely that this case will end up at the European Court of Human Rights, with Ukraine found to have breached the Loshchynivka Roma applicants’ rights and ordered to pay compensation. 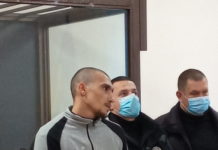